OPCW’s 19th Conference of the States Parties | Some impressions

This is a cross-posting from the Global Norms Blog

From 2 to 5 December 2014, I had the pleasure to take part in the 19th Conference of the States Parties (CSP) of the Organisation for the Prohibition of Chemical Weapons (OPCW). The OPCW implements the Chemical Weapons Convention, the international treaty banning the use, storage and production of all chemicals used for warfare. The OPCW became active in 1997, it is thus quite a young international organization. The organization has nearly reached universality. A great achievement given its demanding obligations that states agree to when signing the CWC. 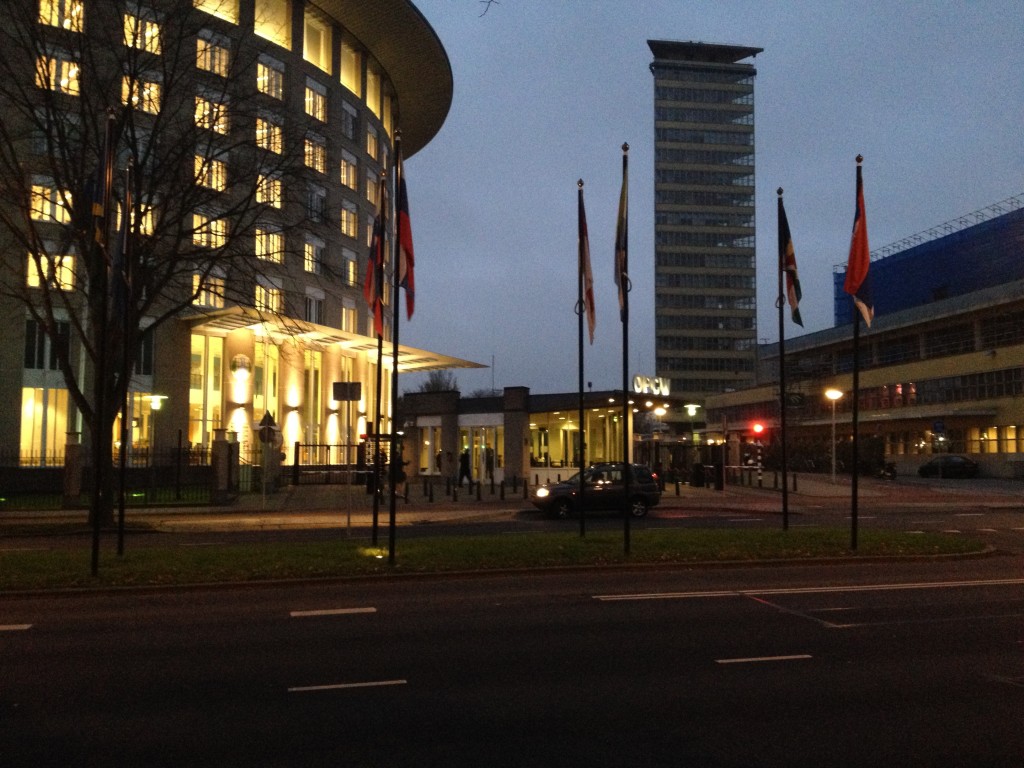 During my participative observation of the proceedings of the CSP, I learned a lot about the organization. First, as other IGOs, most notably the IAEA, the OPCW struggles with its self-understanding as a technical organization. There are some changes in recent years: the award of the Nobel Peace Price and the destruction of the Syrian CW program. Those caused some public attention for the organization as it stepped into a more political role. Some member states observe and criticize that tendency. Often, they made their concerns heard during the plenary debate. Second, I had the impression that the self-organization of the represented NGOs, especially through the Chemical Weapons Coalition, was quite strong. There was thus a high quality of civil society participation. The Coalition organized some fine side events and discussed critical issues with relation to the work of the OPCW.

The OPCW has no formalized process of accrediting NGOs. Yet, the application for invitation is a simple web form with information on the NGO and the names of the delegates. Getting approved, however, requires a formal decision by the member states. This CSP has shown that the approval process is not free of political considerations. Individual member states vetoed a few NGOs or individuals, banning them from the CSP (see e.g. the German statement, condemning this practice).

The list of participants comprises 63 NGOs. Those include research institutions, some industry and science associations, and many humanitarian organizations. During the CSP, NGOs have access to all public sessions and side events. The CSP can also close sessions to the public. During this CSP, states discussed a special agenda item on the implementation of the Convention and CW destruction in a classified session. Even so, since the last CWC Review Conference, NGOs have the opportunity to address the CSP. This was amply used during this year’s CSP. The impact of those speeches may be debated, but the general perception, at least from the NGOs and some state delegations, was quite positive. At least, the statements are also made available to the public on the CSP website.

Compared to this large number of NGOs, only 7 other IOs participated. Further, the participation, or permanent occupation of seating space, of state delegations was mixed. However, ambassadors in their function as permanent representatives to the OPCW headed most delegations. This is different in the IAEA, where delegation heads are often officials from ministries.

Atmosphere of the CSP

The CSP seemed to be driven by overarching consensus on most agenda items. The state delegates were relaxed and the general proceedings appeared to be well planned. Take as an indicator that the CSP already closed in the morning of its final day. The year before even a day early. At this year, most notable public debate evolved around the final report of the CSP. The report is decided upon in the plenary, paragraph by paragraph. Discussion evolved around a statement by Italy and 56 other states on CW use in Syria. This was the most visible moment of politics, when states like Syria, Iran, Cuba, China and Russia debated the position, wording and connotations of the text. After consultations, the states fond a consensus draft, preserving the OPCW’s consensus culture. Of course, I had no insights into the private negotiations and committee work, which is more prone to be filled with political conflicts.

In summary, I enjoyed getting new insights into the working of the OPCW. Also, I liked getting to know people that are passionately “working together for a world free of chemical weapons” (The OPCW’s recent motto, see image video, below). </p>

Comments, thoughts, criticism? Please share in the comments or via e-mail.