Workshop: The Global History of the IAEA

From September 19 – 20, I head the pleasure to participate in a great workshop on The Global History of the International Atomic Energy Agency. The workshop brought together of number of researchers from different disciplines, researching the IAEA. The workshop was organized by The Center for International Security and Cooperation at Stanford University, the Department for Contemporary History at the University of Vienna, and the Nuclear Proliferation International History Project.

Thursday, the program started with a welcome reception and some introductory remarks by the main organizer Elisabeth Röhrlich, Oliver Rathkolb, David Holloway and Jonathan Hunt.

On Friday, papers were presented in three panels. In the first panel, Carlo Patti discussed Brasil’s position and influence during the founding years of the IAEA, underlining Brasil’s pushing for a strong development capacity of the Agency. Anna Weichselbraun presented her research on changes in the perceptions and imaginations of the roles of IAEA safeguards inspectors, highlighting a growing professionalization of safeguards specialists. Jonathan Hunt discussed the role of the IAEA during the NPT negotiations, arguing that the Agency was rather a passive observer in the final years of NPT negotiations. 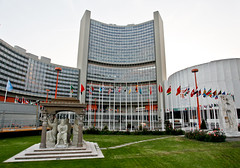 In the second panel, Målfried Braut-Hegghammer provided some insights into the Agency’s technical cooperation activities in the Middle East. She showed that in the early years, technical assistance projects were often not successful in the region, also due to lacking state capacities. Hassan Elbahtimy discussed Egypt’s early approaches to IAEA safeguards. He showed how the Egyptian position changed from safeguards skepticism to tolerance of safeguards from 1957 until 1967. Or Rabinowits reported about IAEA-Israel relations, especially about the politics that evolved around the issues of full safeguards, Dimona and Osirak.

On the third panel after lunch at famous Café Central, I had the privilege to present my current findings on the changes of discursive images of the IAEA, which highlight the growing perception of the IAEA as an important actor of international security politics (see presentation and material). Next, Grégoire Mallard discussed changes of the international non-proliferation regime, developing a critical assessment of UNSC resolution 1540. Then, Patrick Roberts compared the responses of the IAEA and the CTBTO to the Fukushima nuclear accident, highlighting pitfalls of old, and possibilities of creative problem solution in young international bureaucracies.

The day ended with a round-table on general questions and developments in the study of the history of the IAEA, other international organizations and nuclear history. David Holloway, Sonja Schmid, Matthew Jones and Benoît Pelopidas touched the following issues:

On Saturday, the workshop closed with a round-table on the IAEA archives. Chaired and introduced by Oliver Rathkolb, William Burr, Elisabeth Röhrlich and Leopold Kammerhofer (IAEA archivist) discussed the working of the IAEA archives. As problems, a number of researchers raised questions about the de-classification policies of the IAEA. This is becoming a problem as more and more documents that are restricted in the IAEA’s archives are accessible in national archives. However, it needs to be noted that most of the researchers applauded the support services by the Archives’ staff.

Overall, I greatly enjoyed the conference and learned lots of new things about the Agency and its early history. Also, it helps me to put into perspective our collaborative research on IO rhetoric and legitimation. So, thanks again to the organizers for the invitation and for a smoothly running workshop.