This is a cross-posting from the Global Norms Blog

In our research project, we ask how norms of global governance have changed. One indicator for growing attention to democratic norms is the participation of non-state actors in the processes of intergovernmental organizations. In my dissertation, I focus on this aspect and ask which conditions explain this phenomenon. In this post in the Quick Data Series, I quickly look at non-state participation in the General Conference of the International Atomic Energy Agency. As always, reproduction material and the raw data are available here.

Participation is formally regulated by the Rules contained in (INFCIRC/14). However, since 1975, NGOs are usually invited on an ad-hoc basis by the Director-General. There are some interesting developments visible. First, in the early years, there was already some relatively high participation of non-state actors. Yet, NGO interest in the work of the IAEA or IAEA interest in NGO input seems to be declining in the 1970s and 1980s. Only since the 1990s, there is an increase in participation. Especially since the 2000s, there is a tremendous increase in the number of NGO representatives that are participating in the General Conference. Thus, NGO delegations to this event have grown significantly in recent years.

Yet, who are the NGOs that participate and for which issues do they lobby the IAEA? The following graph illustrates the share of issues areas that the represented NGOs stand for. Data for the issue areas is taken from the the Union of International Associations data-base, where available. 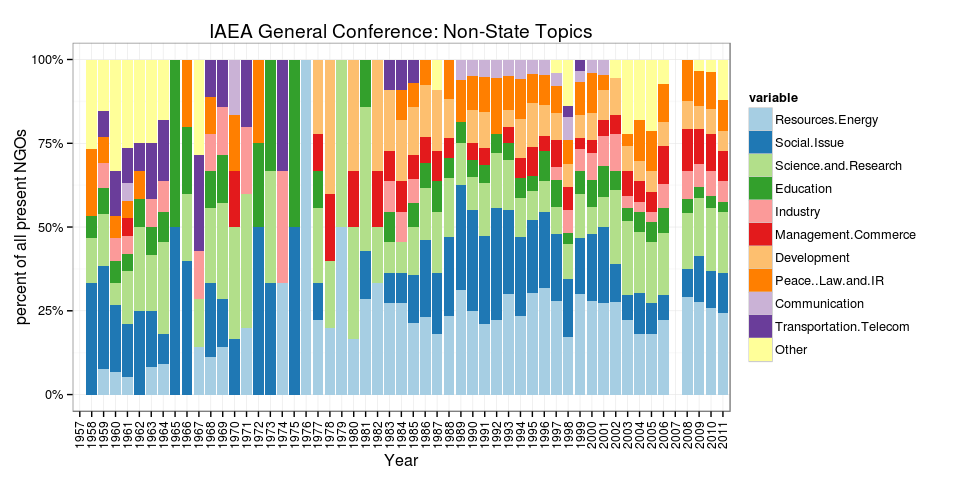 When looking at the early years, it is especially social issues (represented through professional and worker associations), business and science that are common topics that the NGOs stand for. Looking at changes over time, it is especially the growing representation of NGOs that stand for the interest of the (nuclear) energy industries that is remarkable. Further, there is decreasing representation of social issues over time. Topics like development were strong in the late 1970s and early 1980s, yet lost importance since then. Similarly, representatives of the communication and transportation industries seem to have lost their interest in the work of the IAEA over the last decade. Next to the topics already discussed, issues like politics, peace and international law are constantly represented at the IAEA General Conference.

Are there surprising data points? First, I would have expected to see a raise of political NGOs since the raising politicization of the Agency’s work since the 1990s. Second, there is surprisingly little representation of environmental NGOs or NGOs that focus on development. The latter point is especially surprising given the relatively large share of funds that the Agency spends on technical assistance. Overall, however, the composition of NGO topics relatively clearly points to the technical-scientific character of the IAEA and its General Conference (see my impressions of the 2012 GC, here). Strong non-state activism, e.g. for environmental protection and against nuclear energy, is not present at the General Conference.

What do you think of the data? What is surprising for you? I will further explore non-state participation at the IAEA in my dissertation and I am happy to read your comments, either via e-mail or here.