Cross-posting from the global norms blog

In our collaborative research, we are examining changes in how international organizations try to legitimize their activities to various audiences. The larger goal is to identify patterns of changing norms that underpin the legitimization efforts of international organizations. Here’s a quick overview of some patterns for the case of the International Atomic Energy Agency. This is work-in-progress. Data for replication and other material is available here.

One step in our research project is to read three kinds of sources in which we expect to find a large amount of legitimacy-relevant discourse. In the case of the IAEA, these sources are:

While reading those documents (the Annual Report and GC Debates in 4-year steps, starting in 2010), I coded all statements that made reference to the possible legitimation of the IAEA. For example, the IAEA may state that its main goal is to provide knowledge and scientific insights to its member states. Such a statement would then hint at a pragmatic form of legitimation, based on norms like independence, expertise and science. The coding unit is a statement. 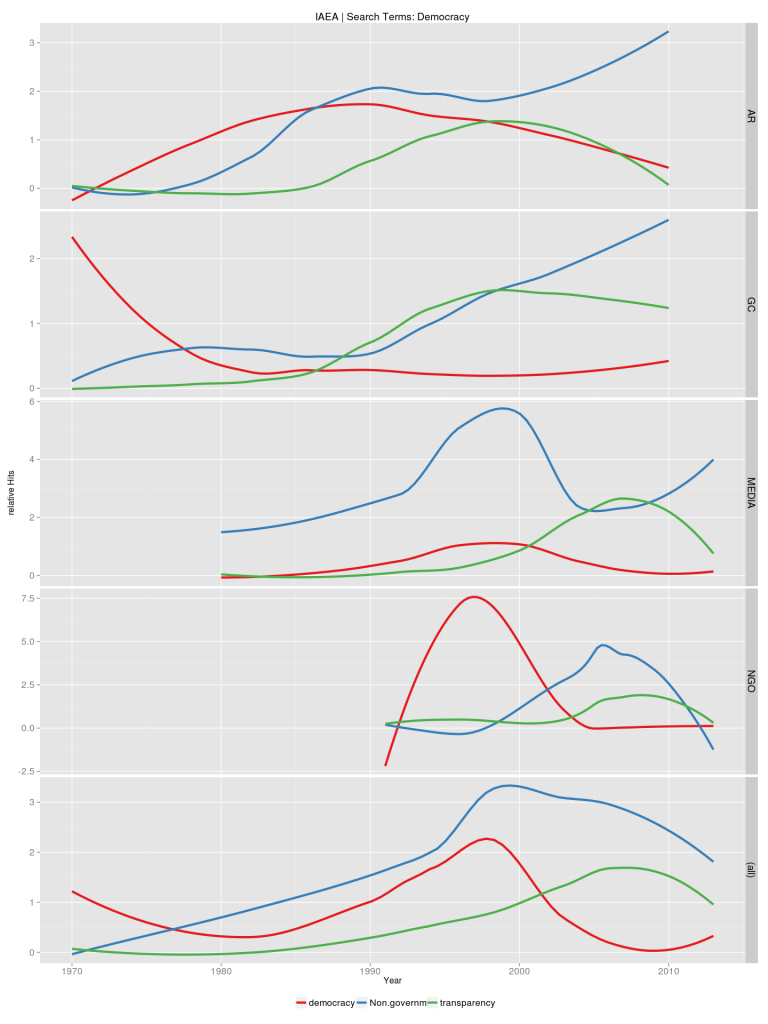 First, a central starting point of our research was to see if democracy-related statements are becoming more important for the legitimation of global governance organizations. As the graphs illustrate, this is only a marginal trend. Overall, there is little reference to democratic values. However, I find a certain trend towards more reference to the participation of NGOs and the norm of transparency. This is more visible in the Annual Report and GC discussions, indicating that the Secretariat and member states have paid slightly more attention to issues of democratic global governance in recent years. 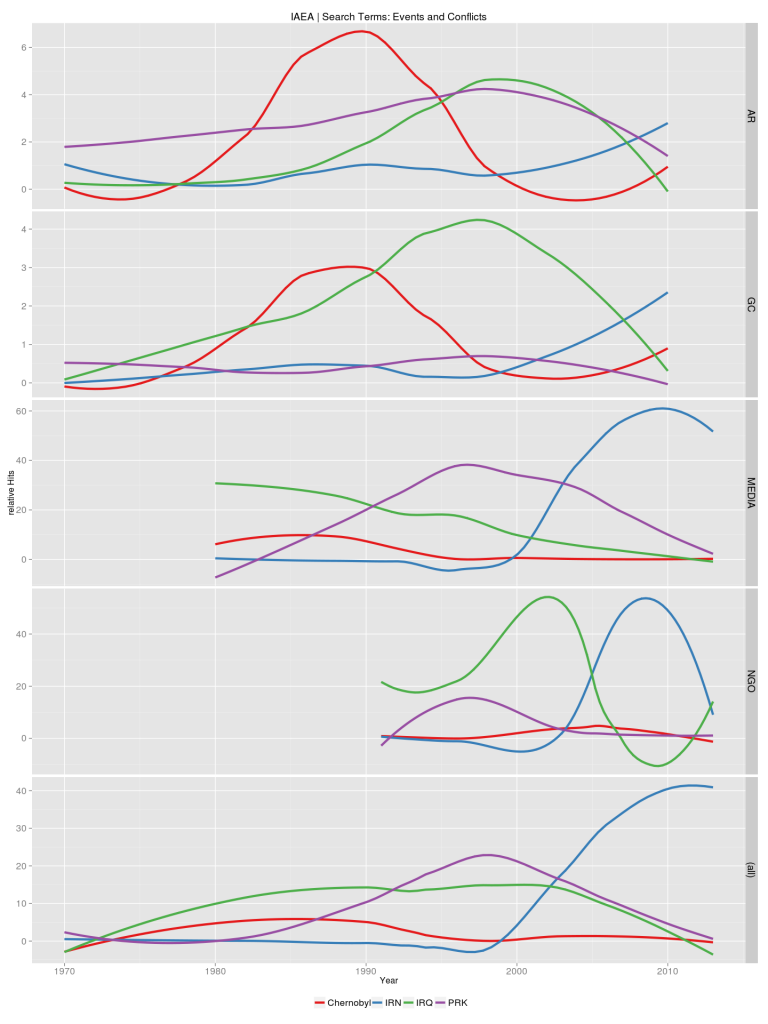 Over the years, the IAEA has become more involved as an inspection agency in political conflicts (e.g. in IRN, IRQ, PRK). The graphs illustrate this well. The Chernobyl nuclear accident, for example, was a dominating point of reference for the work of the Agency from the mid 1980s until the mid 1990s. Also, the first UNSC mandated inspections in IRQ were much debated in the Annual Report and during the General Conference. In the last 10 years, IRN became another important topic. When looking at the external discourses, it is first notable that the Media and NGOs focus to a much higher extend on the IAEA activities in those conflicts. In 2010, for example, 60 p.c. of the media statements focussed on the IAEA in the IRN conflict. In the same year, this topic only took 2-3 p.c. of space in the internal discourses. Overall, this highlights a general issue in the IAEA discourse: while the Media and other external sources tend to focus on the Agency’s involvement in political conflicts, the Agency itself tries to maintain a more balanced image, highlighting other activities like technical cooperation, research and energy. 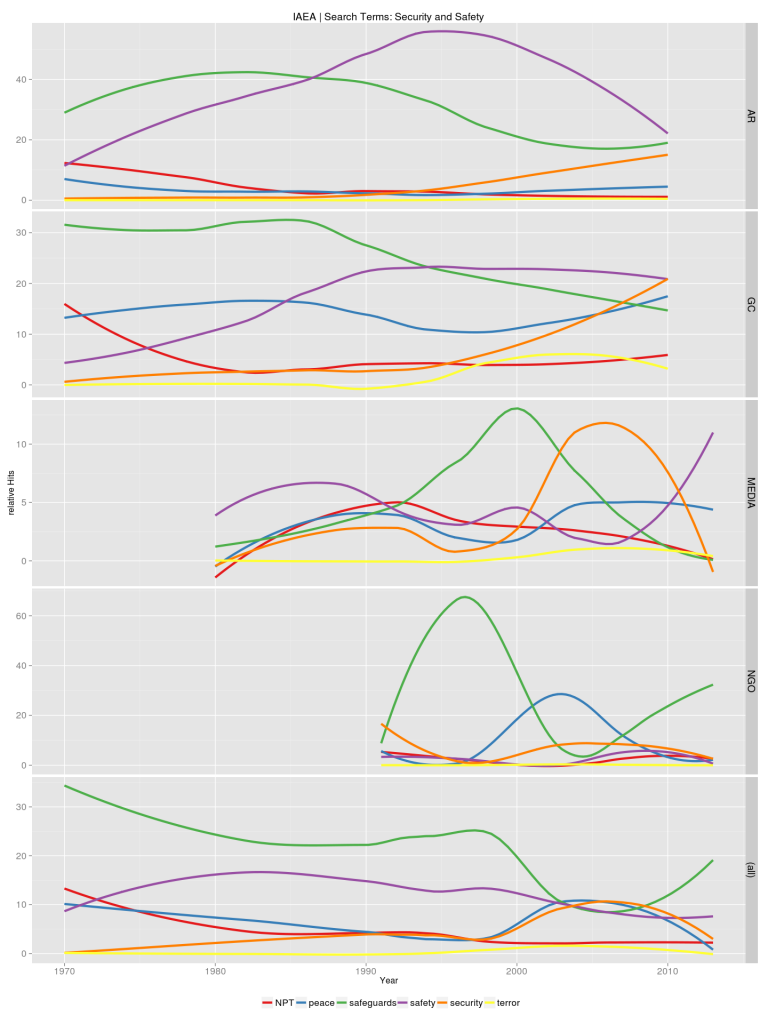 Another trend relates to the discussion of the “main purpose” of the IAEA. As the graphs on the Security and Safety related search-terms show, the IAEA AR strongly highlights how the organization contributes to questions of nuclear safety and non-proliferation through its safeguards. The focus on safeguards has been strongest during the 1970s and 1980s, while in the two recent decades, there was more of a focus on general safety. Also, since the 2000s, there is much more attention on nuclear security. This focus on the security functions of the Agency was particularly demanded by the Agency member states. This trend towards “securitization” of the Agency is also reflected in the Media. Not surprisingly, with the reporting on political crises, they also focus on the underlying safeguards system and its implications for security and non-proliferation. Also, with the Fukushima incident, the media has re-discovered the Agency as a nuclear safety provider. The NGO sources are more diverse, but a larger focus on safeguards and peace is visible. 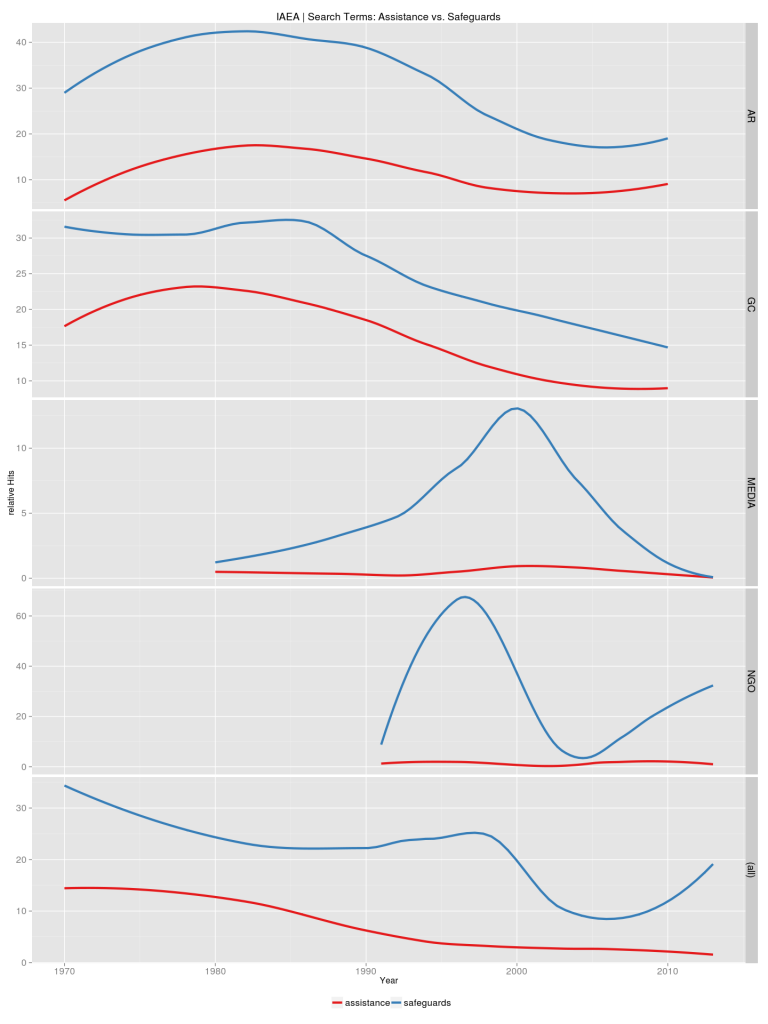 Finally, this last graph illustrates the development of a core conflict within the Agency membership, i.e. balancing the Agency’s core functions of verification and promotion. Especially during the 1970s and 1980s, when the importance of safeguards under the NPT were still relatively new for the IAEA, especially developing members demanded more efforts to assure an equal growth of both safeguards and technical cooperation budgets. However, this debate appears to be less relevant in the last decades – either because of amelioration of the conflict or giving up the fight on the side of the developing member states. Generally, technical assistance was always less important in the official debates. The same is even more true for media and NGOs: technical assistance projects like training missions, the funding of equipment or research projects are hardly ever mentioned in the external discourse. This, by the way, is also noticed by the Agency. It actively tries to battle its public image of a nuclear watchdog. Yet, more work needs to be done to make the media and NGOs report stories from the Agency’s promotion pillar.

The paragraphs above highlight some first impressions and interpretations of the data that I have collected during our research project. This has thus been a first look into ongoing research. In the next months, I will try to post updates. Currently, I am writing a first draft IAEA chapter for our collaborative book.

So if there are questions, remarks, or if any of you are interested in similar issues, I would be more than happy to hear from you. So, just leave a comment or send me an e-Mail and check out the sources.